The year was 1971 … the Viet Nam war was raging, Nixon was president, the Kennedy Center opened in D.C. while in Tucson, a group of idealistic young artists got together to create an arena for new playwrights and produce a different kind of theatre for an adventuresome audience. The name Invisible Theatre was chosen because of that invisible energy that flows between performers and an audience that makes the magic of theatre. Hear the rest of the story of this iconic arts organization as IT celebrates its Golden anniversary. 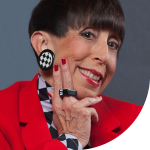 Register for Food for Thought – Session 1