Turning the Page: Adventures for Bibliophiles

Cost: $55.00 for 2 session(s) Two on demand video presentations, each available for 7 days

Instructor: Paul Fisher been part of The Learning Curve since its beginnings.
Paul Fisher 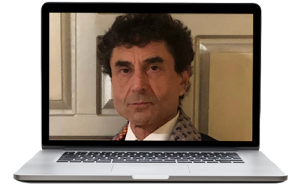 Make the most of time at home with a pair of armchair adventures fueled by intriguing non-fiction books selected to both enlighten and entertain. It is often said that truth is stranger than fiction. Join frequent Food for Thought host Paul Fisher for detailed introductions to non-fiction titles you may have missed and come away with a treasure trove of new information and inspiration for your own reading list.

Session 1: The Food Explorer by Daniel Stone
Meet David Fairchild, a young botanist and geologist at the turn of the century, with an insatiable lust to explore, who set out in search of foods that would enrich the American farmer and enchant the American eater.  Along the way, he was arrested, fell ill, and bargained with island tribes (some cannibalistic).  His adventures resulted in the most diverse food system ever created.

Session 2: Genghis Khan and the Making of the Modern World by Jack Weatherford
Join a host of characters as diverse as European and Russian knights, Papal envoys, Chinese navigators, Buddhist monks, devoted Mongol soldiers, Islamic scientists, Persian philosophers and merchants and follow the path of Genghis Khan from the heart of Mongolia, east to China and Japan, through Baghdad, west to Europe, south to India and Turkey, and north to Russia. By the time you’ve completed this expedition you’ll have a new appreciation of his lasting legacy.

One 45-minute presentation will be released each Friday to be viewed at your convenience using the link provided.

Register for Turning the Page: Adventures for Bibliophiles

Online registration has been closed for this class. Please call (520) 777-5817 for availability.